As Women’s History Month ends, the Denver Police Department is honoring one of their own. Det. Gail Riddell was one of the first females to hit the streets here in Denver when it was allowed in 1972. 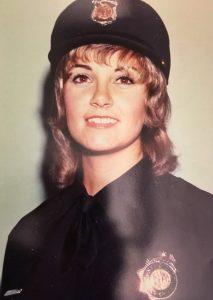 (CBS DENVER) – “She had a fiery personality, and I don’t know she might have been working as a waitress or at a makeup counter when she got into some debate when a guy friend said women wouldn’t succeed in law enforcement, and so she joined the police academy on a dare basically,” Riddell’s daughter, Molly, said.

That dare would lead to a 30-year career with the Denver Police Department.“She was really naturally good at it,” she said.

Riddell signed on as a police officer in 1969, only the second class of recruits to include women.

“Some of their initial uniforms were just skirts and really impractical,” Molly laughed.

Her mother’s ability to connect with people meant criminals often opened up about the how and why behind their crimes, making Riddell an expert in theft prevention. She would quickly climb the ranks to detective

On March 26, 2019, the City and County of Denver issued a proclamation to honor of the life and service of late Detective Gail Riddell.